Hugo Claus’s semi-autobiographical Het verdriet van België (The Sorrow of Belgium) is Belgium’s Big and Important Book about World War II. It covers a lot of themes — growing up, family, Flemish small-town life, collaboration — as seen through the eyes of an impressionable child. I found it a bit of a slog.

Mostly, I guess, because I found the protagonist, Louis Seynaeve, to be an unsympathetic and insufferable git. In the novel’s first part he’s mostly tolerable as an impressionable eleven-year old, safely tucked away from the tumultuous world with the nuns in a boarding school, but even there he is bossy and cruel. And as soon as he’s pulled from those confines, it goes wrong. His school work suffers, he enjoys a brief stint in the Flemish branch of the Hitler Youth … sure, having a family that mostly sympathizes with the Germans doesn’t really help, but still: grow a pair.

What also didn’t really help, is that we find out that Louis is supposed to be the novel’s author. In the second part we learn he wrote the first part, but by then it was too late: the narrator had become too unreliable to really care.

I liked the language though. It’s Dutch, but the Flemish use words and phrases that are completely unlike what we would use over here. That was fun.

And I loved, loved, hashtag sparkly-heart (#💖) loved Louis’s grandmother, Bomama. She has all the best lines. For example, when Louis admonishes her that she shouldn’t repay injury with injury because Jesus would not do such a thing, not even when the Jews hammered nails through His hands and feet, she replied: “Well, I’m not Jesus,” before finishing a game of solitaire. Or when a nun first learned about skiing and didn’t believe such a thing was possible. Her reaction? “Your Jesus did walk on water.” Classic. (When she waxes poetical that heartache may hurt, but that it’s also the salt of life, one of Louis’s aunts has the equally brilliant comeback, “I’d rather have a salted herring.”)

“So, Easter, last weekend, did you listen to the Matthäus-Passion?”

“No, but I did listen to Jeanny”

And in my head, the following scene played out: 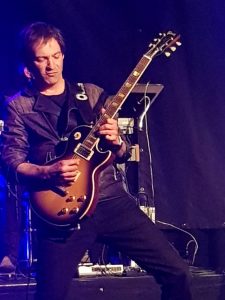 Gezien
Like a Bat Out of Hell: The ‘Rock and Roll Dreams’ Concert, in FLUOR, Amersfoort op 16 februari 2018
Band
Martin van der Starre, Lisette van den Berg & Floortje Smit (lead & backing vocals) / Menno Gootjes (gitaar, backing vocals) / Ronald Kool (piano & keyboards) / Johan Hendrikse (keyboards) / Richard Zoer (bass, backing vocals) / Sjoerd Rutten (drums)
Set list
Bat Out of Hell / You Took the Words Right Out of My Mouth (Hot Summer Night) / Heaven Can Wait / All Revved Up With No Place to Go / Two Out Ouf Three Ain’t Bad / Paradise by the Dashboard Light / For Crying Out Loud // Life Is a Lemon and I Want My Money Back / Midnight at the Lost and Found / We Belong to the Night / I’d Lie for You (And That’s The Truth) / Dead Ringer for Love / It’s All Coming Back to Me Now / Total Eclipse of the Heart / Rock and Roll Dreams Come Through // I’d Do Anything for Love (But I Won’t Do That)

Joe Hill just keeps getting better. I keep on liking every one of his books more than the previous one. Strange Weather is no exception. It collects four short novels, which are all quite, quite good.

It starts off with “Snapshot”, where there is this guy stealing memories with some sort of Polaroid camera, and a kid stops him. It would have been a decent middle-of-the-road story, if not for the underlying humanity of it that just kinda twists your guts.

Next is “Loaded”, which is probably my favorite. It is the all-American story of what happens when the good guy with a gun turns out to be a trigger-happy asshole. There is no spooky or supernatural angle, but it is truly horrific. It is goddamn bleak, and the ending … it may be the only fitting ending, but goshdarn, that’s some bleak stuff.

“Aloft” is a kinda weird, ridiculous sci-fi story, that is made so much better by the interwoven guy-likes-girl-but-girl-does-not-like-boy story.

Finally, the second highlight: “Rain”. It is a sunny day in Boulder, Colorado, when all of a sudden it starts raining glass shards. It caught thousands of people by surprise, ripping them to bloody shreds. In the aftermath of that, Hill lets more shitty things happen to good people, lets them have a little justice, and works to an ending that caught me by surprise. And in between all that, he throws in a couple of heart-wrenching scenes.

If you haven’t read anything by Joe Hill yet, and don’t want to start with one of his doorstoppers (good as they might be), this would be an excellent place to start.

Book read
Joe Hill — Strange Weather: Four Short Novels
First line
Shelly Beukes stood at the bottom of the driveway, squinting up at our pink-sandstone ranch as if she had never seen it before. (from “Snapshot”)